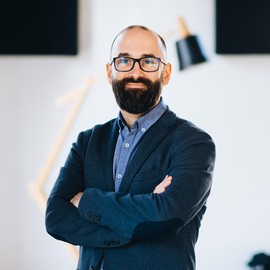 Cristian studied Computer Science at the “Politehnica” University in Timisoara, Romania. He likes tackling problems from different fields with an analytical and logical approach while integrating the human and emotional dimensions.

In 2005 he founded a web development outsourcing company together with two Belgian partners, former clients that grew by 2013 to over 30 people providing web development and related services to several clients in Western Europe.

As the team grew and activities diversified Cristian also grew both as a leader and a manager in the traditional sense but also became interested in new methodologies such as Agile and Lean. As a result, all development teams within the company transitioned successfully to agile processes.

At the end of 2013, the strategy of the company shifted from an agency approach and became focused on a single project, Newpharma, the leading Belgian online pharmacy. The team needed to be reorganized to a core of 12 people. By this time he started using coaching as a tool both for his personal development and also for facilitating processes and development of his team members.

Downsizing from 30+ to 12 was an experience that consolidated his crisis and change management skills. Having the support and trust of the team became the basis for a new beginning. In 3 short years, the team grew again to over 30 and was handling all the web development and some additional services for an online retail business grossing sales of 50+ million euros per year.

Cristian decided to further his coaching skills by attending an intensive Solution Focus coaching course and had excellent results working with individual clients and teams.

At the beginning of 2017, he decided to open a new chapter and focus on coaching, consulting and training.